The first quarter of 2017 has seen the AirDropBox team grow both in terms of staff and products, alongside appointing manufacturers and the production & shipping of our existing range we have been developing bag based systems and are now delighted to announce the arrival of the Backpack Mini bag and Midi Bag systems. The Backpack Mini has been designed to allow the re use of the load container as a backpack making a very effective way of moving a 20kg payload from a drop site and also providing an extremely useful container for transporting water, fuel & firewood or anything else that may be needed to be carried.

The Backpack uses the standard mini parachute & EDM system as the Mini Box providing the same ease of use and preparation for light as well as protecting the payload from shock. The backpack Mini is now available for immediate shipping. The Midi Bag system has been designed to allow bulkier and irregular shaped payloads to be dropped using the same parachute and energy dampening materials as the box based systems, again the simplicity of the design means that it can be prepared for flight from component parts in under 5 minutes without the need for tools or a skilled workforce. The Midi Bag system is now available and shipping.

With new product ideas come extensive testing! to see the new Backpack Mini and Midi bag systems being put through their paces visit our YouTube page for the latest flight trials video. 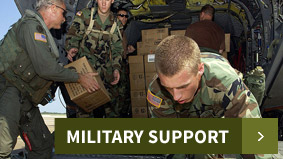